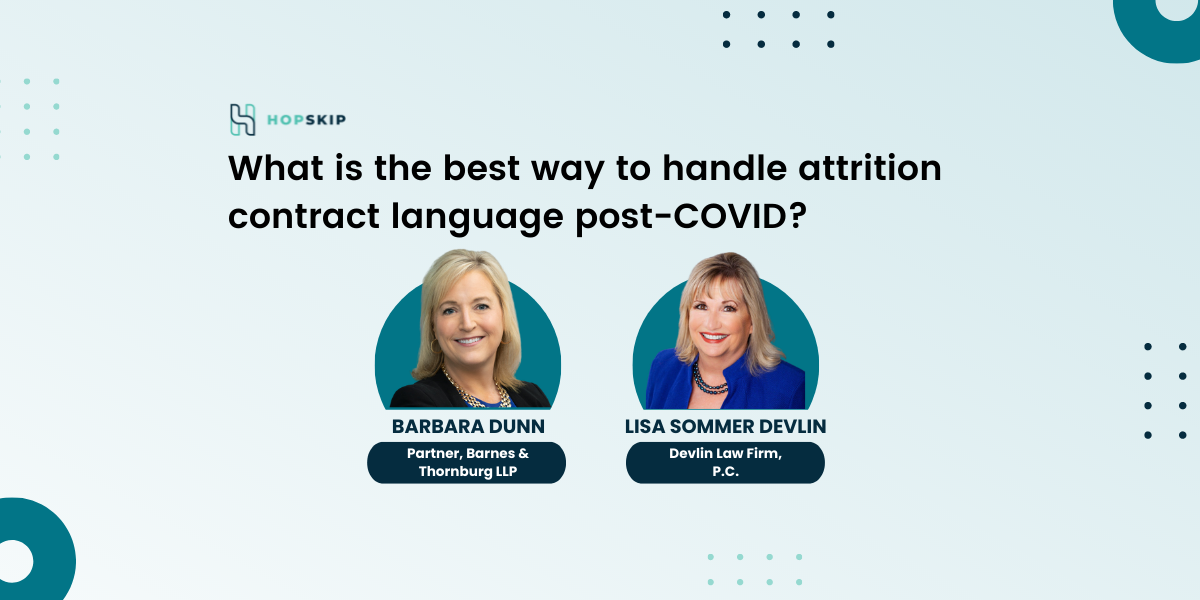 Learn how tow to manage attrition in your hotel event contracts in the post below featuring Barbara Dunn (Partner at Barnes & Thornburg LLP, representing groups) and Lisa Sommer Devlin (Devlin Law Firm, P.C. representing hotels) in Legalease With the Ladies- powered by HopSkip!

Barbara Dunn: My response won’t surprise anybody because it’s the same as it’s been for 30 years now in terms of at least dealing with attrition-related issues. And if I’m saying from the group’s perspective, I’m saying to my hotel counterpart, what minimum amount of the block do I have to use in order not to avoid writing you a check for attrition fees? That’s sort of the million-dollar question when it comes to attrition fees.

The marketplace will demand that while hotels are willing to give groups some cushion of what’s expected to be utilized in rooms and what’s utilized, that cushion could be shrinking at any given time. So it’s important to really focus on that threshold question, so my strategy is to focus on that minimum target.

Ideally, from the group’s perspective, attrition would be based on room count as opposed to room revenue, at least a different perspective on that. When we look at folks booking outside the block on a room count basis, we can pick up folks coming in the door through other means, and that moves the needle to the group to get closer to meeting its minimum as opposed to the revenue model, which might make it more difficult because we’re taking in dollars toward that end. But regardless of that, as the bellwether, negotiating that minimum is key.

So, from the group’s perspective, just make sure you’re comfortable with that, many hotels allow groups to modify their block, or maybe there’s a right to mutually agree to modify the block if that’s something you’re going for. Just make sure it’s clear. When it comes to the attrition clause, how do you calculate attrition? Is it based on the contracted amount, or is it based on the revised amount of the block or the revised amount of the room revenue? It’s a key issue.

One trend I’m seeing, and this is something that many of you have seen here and there over the years, but I’m seeing more prevalently now, and that is attrition based on a nightly or per night room count as opposed to a cumulative room count. So regardless of whether we’re talking about the room count use or the room revenue use, if you see the word per night or you see the word nightly, that means that each night of a four-night meeting, let’s say, or stay, is going to be evaluated on its own as to that revenue amount or room count. You don’t blend them. You don’t add up the highs and deduct the lows. You come up with a net number. Many of you are accustomed to thinking about things on a cumulative basis. And yet again, likely because of the demand and compression in the marketplace. We’re seeing hotels push for nightly attrition, so that’s really difficult for groups.

Obviously a variety of other factors. So really focusing on those as components. This is the bread and butter of the clause. It’s kind of the main component. And looking at what you’re using, looking at whether it’s going to work for your association, likely booking conservatively on your block. If you’re not going to have the ability to adjust the block and have attrition be based on that, or if attrition has got to be a really skinny cushion, like 10%, then you really want to make sure you’re comfortable with the room block. Remind yourself that it’s always a good problem to go shopping. Speaking of one who lives and dies by retail therapy, shopping for rooms is a lot better than writing a check for attrition fees.

And Lisa, I know from your perspective on attrition that getting clients and groups to write checks can become a difficult prospect. So I know it’s nothing that hotels want to see either, right? And nobody likes an attrition check because hotels want heads and beds.

Lisa Sommer Develin: The first thing you have to remember is that if you’re writing a check for attrition, you’re not making up for the hotel’s loss because convention guests present a different revenue stream to the hotel than transient guests. Convention guests stay in the hotel longer. They tend to spend more on ancillary revenues. And so the loss of those guests, that’s being paid for with attrition damages, doesn’t make up for that loss.

You also have to keep in mind that your attrition clause is based on the entire contract. The hotel is looking at what revenue you’re going to generate, how many rooms, at what rate, and what concessions they’re giving you. If you’re only going to use half of the block that you’re asking the hotel to hold for you for six months or a year or two years, the hotel could have sold the other half to another customer and generated revenue. If you’re only going to use half of that, the hotel would not have given you all of those concessions you’re asking for in that contract. And those concessions have real value. And so, you need to look at the contract as an entire package of what you’re committing to the hotel to provide.

Now, Barbara talks about room nights versus revenue. From the hotel’s perspective, revenue is better because, again, we’re looking at not the number of rooms. We’re looking at your revenue commitment to the hotel, especially with these groups that want the lowest rate guarantee clauses. And we can talk about that later. I’m, of course, against those, but there’s that issue. But if you come in at lower rates, the hotel is not getting the commitment you made in the contract.

What I am seeing many customers ask and hotels are willing to consider this is, as Barbara mentioned, those room block review dates. So that a year out or six months out, as you’re getting a handle on how your event is returning after COVID, you can adjust your room block. The hotel would much rather get those rooms back early and sell them to somebody else than have you write that check for attrition. But if you’re getting down to the wire and suddenly you say, we’re not going to meet our numbers, then that’s not going to help the hotel. So you need to work together. And regardless of what your contract says, you always have the option to go to the hotel and say, look, based on what we’re seeing, this isn’t going to happen.

So when Barbara talks about nightly attrition, she’s right. Because of that transient push and because of the business travel that is returning to the marketplace right now, there are many times when a hotel can fill those rooms on a specific night if you don’t use them. And so they want your commitment that you’re going to fill those rooms on that night. I’m not seeing that often, but it is definitely a trend that is out there, especially in your big business cities where business travel is a big thing. So keep all that in mind. Come to the hotel with a clear idea of what you think your event will be.

And I agree with Barbara if you’re concerned, rather than try to avoid a nutrition clause, book a smaller event. And as Barbara says, it’s a good problem to have to find additional rooms rather than trying to lock in an attrition clause that leaves the hotel holding the bag if you don’t fill your room lock.

Barbara Dunn: We had a question in the chat about, hey, “I’m meeting the revenue number, the minimum, but I’m not meeting the room count number.” And, you know, certainly what’s working for your group. Maybe revenue has been better in the past, or room counts better, you know, try to figure out what’s going to work better. Maybe there’s a way to draft the clause that could be either exroom count or the dollar. Certainly, I think there are some opportunities for looking at the clause, whether it’s working for you, given the current climate.

The last point is, don’t cut off your nose to spite your face. Many groups will say, well, I have to book a block of this minimum mountain to get these concessions a rate. If you’re finding yourself doing that, that’s a great time for a time out to say that is the best approach. Because I think in a lot of cases, as you point out, it’s better to go with the more conservative block, even if there are some additional costs associated with it, and figure out how to pay for those costs versus having to write a check for attrition.