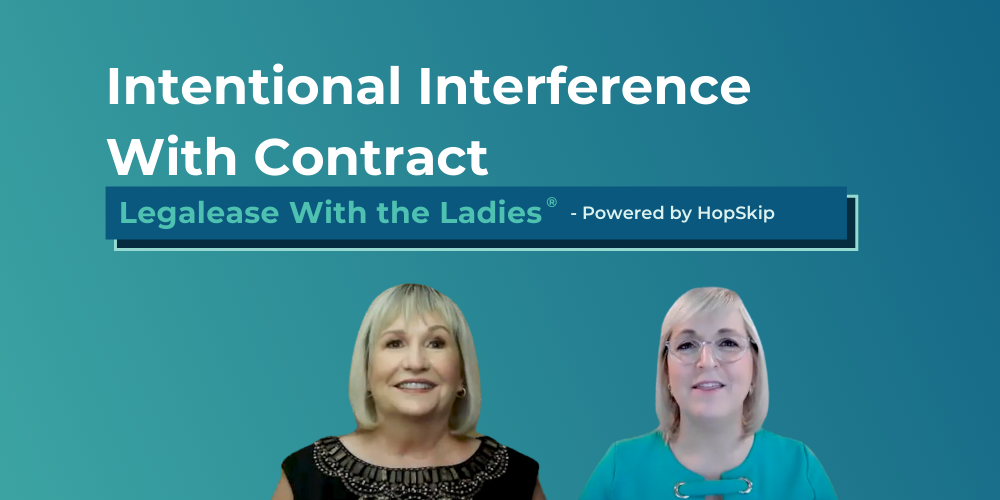 In this video, you'll learn the concept of intentional interference with a contract, how to avoid any claims that you have intentionally interfered with your hotel contract.

Barbara: Hi, I'm Barbara Dunn, an attorney that represents groups in connection with their meetings travel and hospitality contracts.

Lisa: And together this is Legalease with the Ladies powered by HopSkip. In this video, we're going to talk about intentional interference with contract. This is something that comes up in the event industry when a customer decides that they want to change the location of an event that they already have booked. It's not uncommon for a variety of reasons. Most recently because of COVID, a group may have an event booked at a hotel that has shut down either temporarily or permanently due to COVID. Or it may be a situation where a group has booked an event many years in advance and the group changes its focus, its approach, maybe its board of directors. And they decide that going to Florida is no longer right for the group now they want to go to Chicago.

It's very typical in those situations for the customers to go to hotels in the location they're sourcing and say, ‘Hey we're booked in Florida but we want to move here. Will you give us a contract?’ And they're often surprised to find out that the hotel will say, ‘No, we can't do that.’ The reason for that is if the hotel entices them away from their current booking. In other words, if the hotel in Chicago says, Sure we'll give you a better deal from Florida, cancel your contract with Florida and come over here. That's what the law calls intentional interference with contract. If you know that somebody already is in a contract with another party and you induce them to breach that contract, you can be held liable.

So, the hotel in Chicago could get sued by that hotel in Florida for getting the group to breach their contract and cancel the Florida event. So, that's why when groups are sourcing new venues for an event that they already have booked, hotels are usually supposed to tell them if they're doing it right, they say, ‘Go ahead and cancel your Florida event. Come back to us when you resolve that situation and then we'll be happy to give you a bid.’ Now I understand that from the group's perspective, they're saying, ‘Well, I don't want to cancel the deal I’ve got until I know that I’ve got another opportunity.’ And that can create a real problem.

But both from a business at business ethics standpoint, the hotels don't want to be undermining each other. And also, from a legal standpoint, claims have been made. So, that's the reason why hotels are saying, ‘I'm sorry we can't give you a bid until you've canceled your other contract.’ This is a problem that's going on particularly now as I mentioned. There's a very well-known hotel in Washington DC that has shut down probably permanently and many groups are trying to relocate. And hotels and groups are struggling with when they can make these decisions and when they can move forward. Barbara, what are you doing in these kinds of situations?

Barbara: Well, Lisa you're right in that. An intentional interference with contract or tortious interference as it's often called. It's important and an element really critical to that as you note is the fact that the party that they're seeking to contract with, so the so-called "next hotel" is aware of a current contract that that customer has with the first hotel. Being aware of that is really the first issue. What's unusual I think in the example that you gave Lisa with the hotel closing its doors is, as to whether the hotel or pardon me whether the group has been and when they will be released from liability. Because in any scenario along these lines in order to avoid that claim of intentional interference with contract, you have to know that that other party has closed out, cancelled or been released from liability to free them up to contract with the new party.

So, there's a lot of concern along those lines of really making sure that groups aren't double-booking contracts or hotels aren't, I’m sure, are not wrongfully moving groups around and the rest when they know there's an existing contract. A lot of groups don't necessarily understand this concern. They might just see it as a hotel competitor to competitor concern, but it is very much a real basis for a claim. So, it really is important to understand that. And I think often as you point out Lisa, groups would want to hedge their bets not cancel a contract until they get another contract. And yet in doing so may themselves run into this wrongful or tortious interference with contract.

So, it's really important to think about the logistics. I’ve had experiences in these situations where the parties can all negotiate together to release from a contract and allow another party to contract with the new venue. But it takes everybody at the table. You've got to do it up front and you need to be transparent about it. You can't go about it not being transparent, because in my mind that's only makes it more likely that you're going to trigger an issue. And as you point out Lisa, it isn't so much even always the legal issue. It's the ethics issue. We're fortunate in our industry folks may have nine lives or more. So, your reputation is at risk and ethics are at risk as well. It's important to really make sure you're not stepping afoul.

So, if you have a circumstance along these lines I definitely encourage you to talk to your legal eagle just to understand the mechanics so that you keep out of that minefield and understand that the hotels are doing the same. They're not necessarily being difficult to deal with, it's just that they don't want to inject themselves in a potential dispute. Lisa, anything to add?

Lisa: I think that Barbara makes a really good point and that is, it's good to be transparent and to try and get everybody involved in the conversation. Certainly, if your existing contract is in a branded hotel, one way to approach that is to talk to their national sales level people and say, ‘We need to move from the Florida hotel to Chicago.’ And they may be able to facilitate that move internally between hotels that they manage jointly. But if that's not the case, probably all you're going to get when you go to that new hotel that you're sourcing, if they're doing it right, all they can tell you is, ‘We have availability over the dates that you're interested in. Come back to us once you've resolved your problem with the other hotel.’

And then you can encourage them and say, ‘Look, let's all talk openly and honestly about the situation.’ If you go to the first venue the Florida hotel I mentioned and say, ‘Look, we're not going to stay here. How can we work out the deal so that we can move to Chicago?’ Maybe if you say we're not going to come in 22, but we'll come back in 24, let us go so we can move to Chicago for our business reasons. Maybe you can come up with some kind of a settlement. But the key thing to remember here is don't do it without making sure that everybody knows what's going on. Otherwise, you may find yourself on the wrong end of a lawsuit.

Thank you for joining us. This has been Legalease with the Ladies powered by HopSkip. Please leave your comments below and we look forward to seeing you in our next video.