Marketing Your Meeting In The Hotel's Public Space 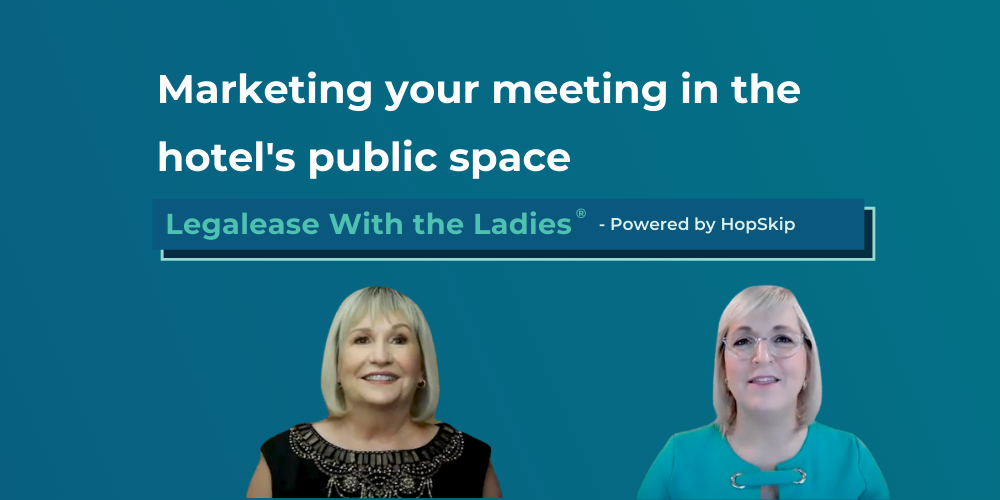 Marketing your meeting in the hotel's public space

Barbara: Hi, I'm Barbara Dunn, an attorney that works with groups in connection with their meetings travel and hospitality contracts.

Lisa: And I'm Lisa Sommer Devlin, an attorney that represents hotels and resorts regarding convention and group related matters.

Barbara: And together, we're Legalease with the Ladies powered by HopSkip. Today's topic is on the use of public space in hotels for marketing in connection with groups meetings and conventions. For many of my group clients, particularly non-profit clients, the ability to showcase and acknowledge those companies who have sponsored the event is really important. Sponsorship sales and opportunities and the visibility that it brings are particularly important as well of course to the sponsors in trying to attract the attendee’s attention. And the goal really is to make sure that the sponsor gets as much recognition as possible. In years past, that sponsorship recognition has often been limited to the event space at a hotel itself.

So, within the particular ballroom for example where the general session might be held or signage out in the hallway where the coffee break is sponsored by a particular company. But as things have progressed, there's a higher demand for sponsorship recognition from the moment a guest walks into the hotel door. And really looking at opportunities for showcasing that sponsor right at that. You've seen with the advent of technology the use of bogos, the use of vinyl clings that you can pretty much put anything anywhere in a hotel. So, often groups are eager to sell if you will those sponsorship opportunities that space to organizations in order to showcase their visibility. But it raises an issue for the hotel, and that is whether the group can in fact sell that space can use that space to allow a sponsor to display that recognition.

A couple of key components here. first, you've got to make it clear from the outset. If having that recognition ability is important to your group, get permission before you start to sell it. Because you never want to go back to somebody you sold something to and say, ‘Ah, I can't provide it.’ So, that's obviously first and foremost. Second is, it should be the case that the group and the sponsor can use that space without charging a fee. But as many planners have experienced in recent years, hotels have started to charge for use of public space. So, charge for example for vinyl clings on the floor (directionals), charge for vinyl clings in the elevators, charge for even in the restrooms - I’ve seen mouthwash dispensers logoed.

So, the point here is making sure you understand whether there is a fee associated with it. Ideally, that fee should be waived for the group. There may however be fees associated with labor. For example, if you're going to put a banner in the lobby of a hotel you likely need to have the hotel's labor rigging folks hang that banner. So, there are costs associated with that from a labor standpoint. But ideally, you're not paying for that public space. You're not paying for that air if you will. Again, this is particularly important as the advent of meetings continues and as hotels open up their public spaces. They're very attractive in general and they're particularly attractive to recognize sponsors. But Lisa, I know there are some nuances with regard to the hotel and use of public space versus private space.

Lisa: You're right Barbara. One of the things to think about is when you are coming into a hotel if you want to have that impact of the bogos or the vinyl clings or something from the minute the guests arrive at the hotel. You're going to be using that public space at the same time as other guests in the hotel that aren't part of your group. If you want to get the opportunity to use all of that public space, you're probably going to have to be the biggest customer that the hotel has at the time. They're not going to want to have the hotel plastered with your name, if they've got another group of equal size that might not find that to be attractive when they come in.

You also need to think about zoning and local ordinances. I had a situation in which a customer wanted to change the hotel into a X-brand hotel for the duration of their event. So, they wanted to put signage on the outside of the hotel, so that there was a real sense of arrival. There may be zoning requirements that prohibit that depending on where you are. So, you're going to have to figure that out, is doing that going to infringe on any kind of trademark situation that might be going on with other brands at the hotel. So, all of those things are things that you need to consider when you're considering these marketing opportunities.

On the flip side of that, kind of related to use of function space is the assumption when you rent space at a hotel, on the hotel's part, is that it's a private event. Many contracts explicitly say that. If you want to have something going on at your event in which you're inviting the public, you need to make that clear in your contract. Because most hotels do not want to allow advertising, have members of the public come in for an event. It raises a whole host of indemnification issues, potential liquor licensing issues, insurance issues. So, if as part of your event you're going to make something about it public, that's something that has to come out right at the very beginning as you're planning for your event.

Most of the time a hotel is not going to agree to that. But with the right incentives and if you're using most of the hotel, probably anything can be worked out. Barbara?

Barbara: Lisa, I think the other thing to note is along the lines of what you mentioned with regard to restrictions. But we know within hotels as well as convention centers, there are exclusive providers of food and beverage, for example. One particular soft drink brand and yet at the group's meeting the other competing soft drink brand wants to put signage up. So, there are going to be some of those nuanced issues and obviously those are things that need to be made clear up front as to whether a hotel could do that. In the convention center space, we always look to see that we can do it and many convention centers will charge commissions on areas use of areas in the convention center.

We typically talk about the allowing the group to display signage acknowledging or thanking a sponsor without that being considered advertising for purposes of the center. So, those nuances within a hotel, I think being sensitive to that, being sensitive to promotion of certain products as well, I think is also important. But bottom line, before you sell make sure you've asked the right questions of the hotel. You understand whether you can in fact sell those areas and what if any cost there is associated with it.

Thanks for joining us for another edition of Legalease with the Ladies powered by HopSkip. Please leave your feedback and comments below. We look forward to seeing you again soon.