Serving Alcohol At Your Events 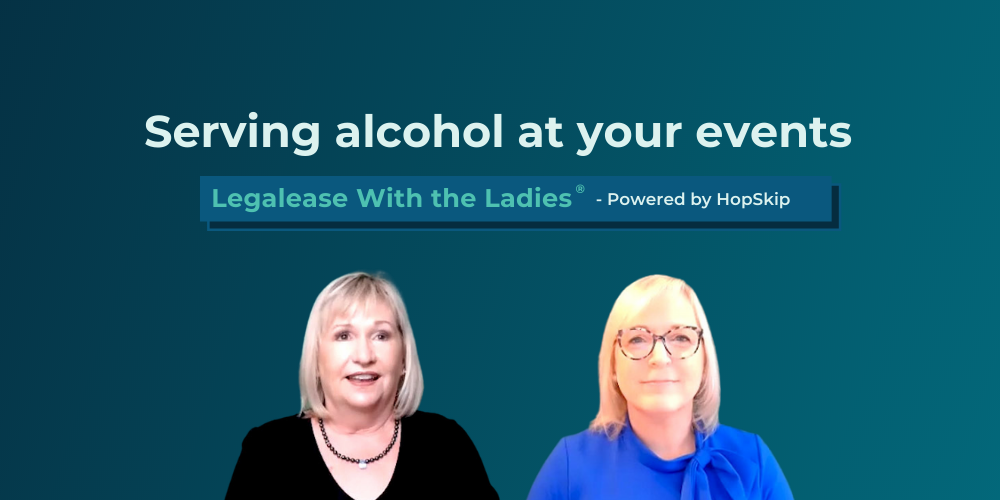 Serving alcohol at your events

Barbara: Hi, I'm Barbara Dunn, an attorney that represents groups in connection with their meetings travel and hospitality contracts.

Lisa: And I’m Lisa Sommer Devlin an attorney that represents hotels and resorts regarding event contracts and disputes.

Barbara: And together we're Legalease with the Ladies powered by HopSkip. We're going to focus today on the service of alcoholic beverages at meetings and events. Certainly, for many organizations, the ability to host receptions and dinners and other functions is important to their goals to networking, to socializing etc. And alcohol plays a component in that for many groups. It's important to understand what the group's risk level is when it comes to the service of alcohol and how that risk level interfaces with the hotel's responsibility as a liquor license holder. So, just talking about a few principles in really every state in the US in order to serve or sell alcohol, you need a license.

The requirements for licensing vary significantly. But suffice it to say if you're working with a restaurant on a private event or a hotel or a caterer for an offsite event, certainly, that individual that company needs to have a liquor license in order to serve or sell alcohol. But there is a concept as well known as “Social Host”. And a social host in 32 states is actually a sponsor of an event at which alcohol is served. And either someone at that event is served that is under the age of 21 or is over served alcohol, that can trigger not only the liquor license holder to be responsible for that claim or anything bad that happens out of that but also the social host.

A lot of these cases are difficult. They come out of high school graduation, college graduation parties, holiday parties for organizations. They're difficult to say that, you know, you'd host a party in your home something bad would happen and you'd be responsible for that. The fact of the matter is that serving alcohol and driving and even not driving can cause situations and concern and risk. So, it is important to manage that risk. Let's break it down a little bit more. A focus on really the group's risk tolerance. So, there's a lot of things you can do to manage risk. Certainly, all the practical things that groups can do to make sure someone doesn't drink too much. Those are all really good strategies to have.

So, closing the bar during dinner or having one free ticket and otherwise, people have to pay for drinks. There's a lot of strategies and groups ask me all the time, ‘Should I engage in those?’ And I say, ‘Hey if those work for you, you want to do that sure.’ But if something bad happens it's going to show you thought about it but it's not going to be an absolute defense against liability. So, that's something important to understand as well.

Indemnification can be important. Liquor license holders are trained. They have to have a certain requisite level of insurance to sell. And if the hotel or caterer was negligent and over-serving someone or not checking an ID for someone, that could trigger an indemnification obligation on the hotel's part. We've talked about indemnification a little bit in previous videos, but something to think about.

One of the things the groups need to think about is general liability insurance. So, most policies exclude liquor claims coverage. It is something you want insurance for. Needless to say, you've got to go back to the insurance broker and ask to get that coverage. Typically, that's known as a rider or an endorsement to get covered for liquor liability claims. And you do want coverage. I’ve worked with a number of groups over the years that say we don't have alcohol at our meetings, we don't think we should have this language in there. My best guidance is let's go ahead and put that in there anyway just to protect against it. Because Lisa as you know, in these liquor liability cases and certainly folks who might be victims of a drunk driver, these are significant concerns. And the so-called saying "hard cases make for bad laws" is really true. I know with your experience as well over the years, that's likely been the case.

Lisa: That's absolutely true. Barbara and I couldn't agree more. My advice to groups is always don't get involved in the service of alcohol. I mean that's the secret bottom line. When you're having an event, you should say that all alcohol will be served by the hotel. The hotel again has the license. The hotel has personnel trained to avoid potential claims and you should put that responsibility on them. Still have the insurance to cover it, but make sure that alcohol is being served by trained personnel.

From the hotel perspective, I've certainly seen things change a lot over the years. It used to be very common to have hospitality suites at big events where there would be a bar stocked and people would come and go. We would also see things where the president of the organization might have a suite for the event, have a stock bar that's replenished. Those kinds of things have pretty much gone away, because you don't want to have a no host bar situation. Both the hotel and the group could be held responsible if people are able to serve themselves alcohol and then go out and cause some kind of an injury. So, you should always focus on having alcohol served by someone who has been trained. I also see things in contracts saying that the hotel will verify that all personnel have been adequately trained and I always take out adequately. Because I don't know what that means and it varies so much.

It just means that they've been trained and there's different kinds of trainings. Tips training is one that's very very common but there's other trainings out there. But the point is that the hotel or the restaurant or wherever you're having your event should have their people trained before they're allowed to serve alcohol. And the group should rely on them. You shouldn't have alcohol easily available at hospitality events or parties where people can serve themselves as I've already indicated. I mentioned in another video that we talked about that oftentimes I’ll see clauses where the group will say that the hotel will indemnify the group for any claim arising out of alcohol. Hotels aren't going to do that, because the hotel should only be held responsible if they are at fault. If they knowingly over serve someone or something like that happens.

The fact that someone manages to get drunk. Maybe they go to the hotel bar and then they go to the group event and then they go back to their room and they drink something out of the mini bar. The hotel shouldn't automatically be responsible. They should only be responsible if they were directly involved in causing that person to be overserved. Another thing to think about is in social events where people want to bring in their own alcohol. I actually had a case where at a wedding in the South. Somebody wanted to bring in their own homemade moonshine. Needless to say, that was not appropriate and not allowed. Not only was the moonshine illegal, but they wanted to serve it to minors and everybody could have been held responsible for that.

It's something you need to think about when you're having other kinds of social events weddings, bar mitzvahs, bat mitzvahs. Even if it's traditional for underage people to be served alcohol at those kinds of events, on a cultural basis, the hotel still can't allow for that to happen because of that potential liability. Alcohol service is fraught with peril as Barbara has indicated. There's lots of bad cases out there where somebody gets intoxicated and causes injury and everybody gets sued. So, from my perspective, the best thing to do is to ensure that you always have alcohol being served by someone who's been trained and licensed. And don't open yourself up to further possibilities. Barbara, anything that we've left out on this one?

Barbara: Lisa, just to dovetail what you mentioned about hospitality suites. Couldn't agree with you more. Yes, it's expensive to have a hotel bartender in there to serve alcohol but you're getting the benefit of their training, their insurance, and potentially that indemnification that is important. And those that want to go to the store and bring in their own that's really at their own peril. And I agree with you Lisa, not only is there a tendency to drink too much but also potential to have minors have access to it and that in and of itself is important as well to think about. So, before you pour that next drink at your function, think about alcohol. Think about the service, not to say it can't be part of your functions but just to say that it should be done in a way that adequately to your word Lisa, addresses that risk.

Lisa: And keep in mind that it's not just claims for people getting over served and causing injury. You also have the potential problem in hospitality suites or other situations, where other kinds of things can happen like sexual assault. So again, you want to minimize those opportunities. Those kinds of things that used to be common shouldn't be common anymore. This has been Legalease with the Ladies. Thanks for joining us. Please leave your comments below and we'll see you soon in our next video.

Every month HopSkip analyzes data from around the meeting and events industry to understand trends in the market. HopSkip picks a few of the most relevant trends from research conducted throughout the month and we share those data points with the rest of the...

This post is part of the HopSkip Destination Insight Series, where HopSkip spotlights destination partners across the globe to bring awareness to what makes their destination unique.

Requesting concessions during the hotel proposal process can be a planner's secret weapon.  If you're bringing a substantial amount of business to a hotel, these concessions can be a serious cost avoidance tool by adding cost savings to your meeting's bottom...