What Constitutes a Force Majeure? 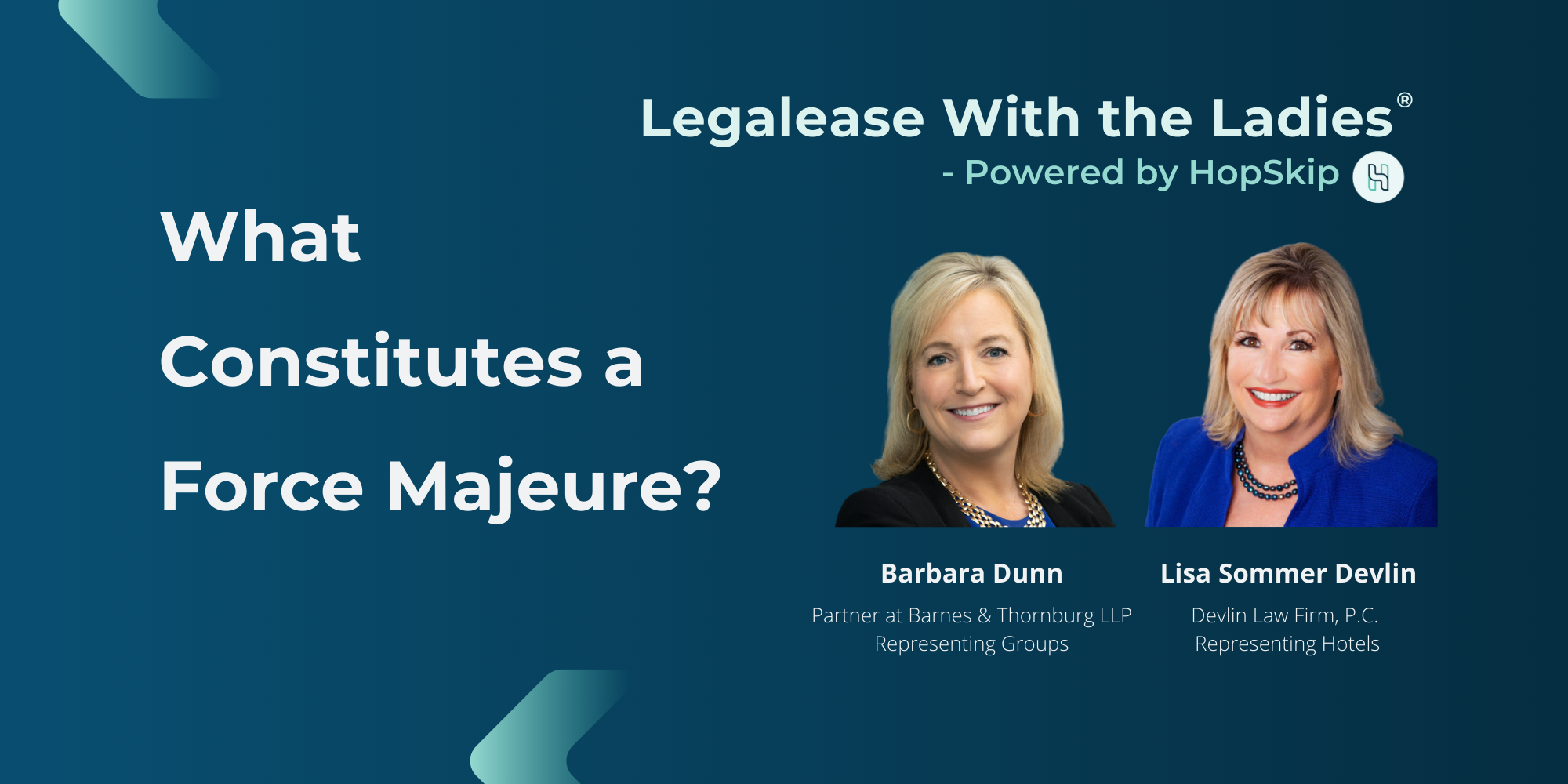 This is Part 7 of a series of posts where we will be sharing transcripts from our "Looking Forward" webinar featuring Legalease With the Ladies- powered by HopSkip.

The information provided on this website does not, and is not intended to, constitute legal advice; instead, all information, content, and materials available on this site are for general informational purposes only.  Information on this website may not constitute the most up-to-date legal or other information.  This website contains links to other third-party websites.  Such links are only for the convenience of the reader, user or browser; HopSkip, its blog authors, and contributors do not recommend or endorse the contents of the third-party sites.

Readers of this website should contact their attorney to obtain advice with respect to any particular legal matter.

I've heard mixed messages on going into detail on what constitutes a force measure event. Some lawyers say to include the kitchen sink in the contract, so there is no argument should one of those come up. Others tell me to be vague because being too detailed could inadvertently cause a non-listed event to be denied. What constitutes a force majeure?

Remember there are two parts to any force majeure provision. The first part is the grocery list. In this case, the questions are directed at listing a whole bunch of bad things that could happen and, well, emphasis is placed a lot on the grocery list. To me, that doesn't often make a difference because I'm looking at the second requirement, which is “what does one of those bad things have to do with a party's ability to perform the contract, in order for the group or hotel to be excused from performance?”

A lot of time and angst is spent on that grocery list of epidemics, pandemics, travel restrictions in and out of certain cities. I'm not saying you shouldn't do that; if that's important to you, you could try it, but from my standpoint, a good grocery list has the bread-and-butter items on there, and has a “catch-all provision” such as “including but not limited to” or  “any other cause beyond the parties control”. Many of you heard me say this is the “Icelandic volcano” catchall phrase clause. I had one client that had noted a zombie apocalypse in their force majeure clause, which could fall into that grocery list.

More importantly, the catchall is tied to that second requirement. So again, commercially impracticable or inadvisable from a health or safety standpoint, impossible, illegal, X percent of the people can't come, whatever the case maybe, to me, that's where the negotiation should be.

I wouldn’t focus a lot of effort or much angst on that grocery list because in most circumstances there is no question if it’s a force majeure. It’s like what the supreme court said about pornography, “it’s difficult to define but you know it when you see it.” It’s usually not challenged if the force majeure event occurred but more often the group's impact that’s often challenged.

I don't really disagree with Barbara. While I am known as a very stringent editor of force majeure clauses, when I got the zombie apocalypse, I left it in cause I thought that's great. You know, if there's really a zombie apocalypse, we're not having this event, so I'll give you that one. But in general, I don't think you need long force majeure clauses.

As Barbara said, it's like what the Supreme Court said about pornography. “It's difficult to define, but I know it when I see it”, and that has been the case for the last year. There was nothing about anything like the pandemic in anybody's contracts, and thousands of events went away without anybody paying anybody anything. So, the problem that I have with having a very lengthy clause is, that as Barbara said, people tend not to look at the two elements. They look at it and they say “oh, here's the word epidemic, therefore I get to get out of the event” and they forget that there are epidemics all the time that don't prevent meetings from going forward. I mean, why would you put epidemic in your clause right now? We're in the middle of an epidemic. So, if you put that in there, theoretically your contract could be cancelled immediately.

So, I'm seeing these clauses that go on and on and on. I've seen half-page long clauses that have all these subjective things. All these difficult to define things, and it's just going to lead to disputes. The same thing is true with the 2nd element that is so important that Barbara said, is it illegal? Is it impossible? Is it impracticable? That's the basic law of force majeure, but I'm seeing customers put in things like- concern for personal safety. Well, whose concern? What level of concern? is it legitimate? I'm never going to agree to that because it's subjective and undefined, so you need to think about that. Also, it’s common for planners to fail to look at both sides. A good example I had was after the Pulse nightclub shooting in Orlando. The Hotel has their client call and says well see there was a terrorist act in Orlando. Therefore, we are excused from our contract. Well, yes it was a terrorist act, but it had no impact on the hotel or the ability of the event to go forward. And so, by putting terrorist act in, they opened the door for that kind of dispute.

So, my advice is to keep it very narrow. Stick to the law and have these discussions that we’re talking about. If your event really can't go forward, a hotel is not going to expect you to pay. The only time hotels will get into disputes is when you're trying to use that force majeure clause to get out of a contract that is no longer convenient for you and that's where the problems will really come up. So, in my perspective, keep it short and have those ongoing conversations about whether you really can or cannot have the event.

This post is a multi-part series where we will be sharing the questions and answers that were originally generated from HopSkip's recent "Looking Forward Webinar" featuring Legalease With the Ladies.  You can download the recorded webinar here.

When the pandemic occurred, I was at a crossroads in my career. After a long career with one company ended, I was presented with the opportunity to make some...

I was already in transition, focusing my attention on family, serving on Hospitality Industry organization boards and mentoring students and young alumni from...

1.    With our inability to host fans for our home games, our team decided to offer a Gameday To-Go concept. The new initiative had two goals:
Read more