What To Include In Your Function Space Contract Clause 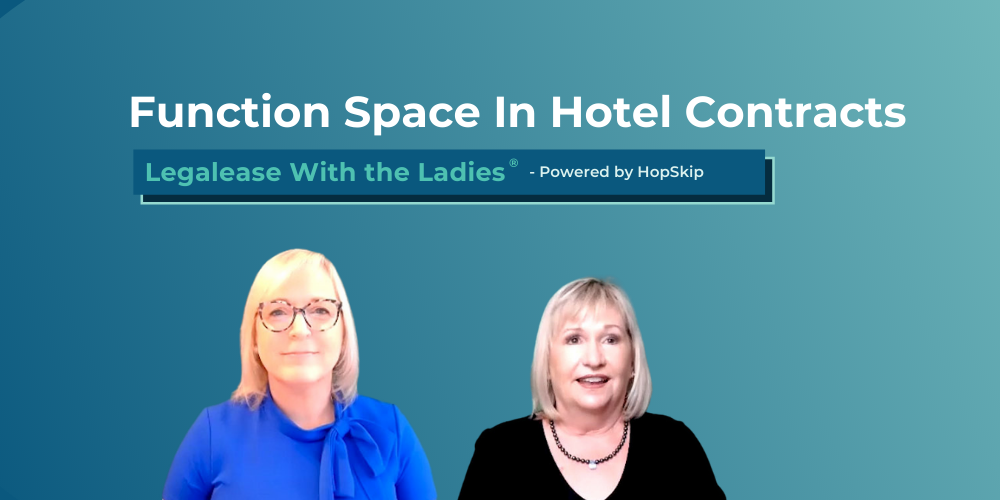 In this video, you'll learn how to approach including a function space clause in your hotel contract. What should you be aware of? What is important to share with the hotel? Why some groups might be sensitive with their function space request.

What to include in your function space contract clause?

Barbara: Hi, I'm Barbara Dunn, an attorney that works with groups in connection with their meetings, travel, and hospitality contracts.

Lisa: And I'm Lisa Sommer Devlin, an attorney that represents hotels and resorts regarding convention and group-related contract matters.

Barbara: And together we're Legalease with the Ladies powered by HopSkip. Thank you for joining us today. Our focus will be on function space clauses in hotel contracts. That is your meeting and function space for everything from your breakout session, general session, to your social functions as well and what to include. From the group's perspective, my recommendation to groups is always to be as specific as you can be with regard to the function space that you're reserving at the hotel. So, included in the function space agenda, certainly dates, times, room sets, but also room names. It's really important as hotels get larger and as many hotels get connected with convention centers. It's really important to be able to identify the space that you're seeking.

With many group functions, especially those that are general sessions, it's really important that you have access to the room for setup and that you have ample space. It's also important as to the location of those function rooms. So, specifying function room names is really important. Having said that, I will say that you have to be aware of the gotcha clause which is a clause along the lines that the hotel reserves the right to reassign your function space. Now sometimes it comes with notice to you. Sometimes it comes with "provided that function space is an adequate size" or things along those lines. From the group's perspective, I want to know about conflict with function space and I want the group to be able to give consent.

Now there are circumstances in which there are emergency repairs needed to space. And I think we all understand that. I don't know that I shared the story with you Lisa, but when my sister got married long ago the week before the wedding, we're watching the morning news and the ballroom where she was going to have her wedding caught on fire. Needless to say, she's not happy, however, we had an ultra-space in the hotel and of course, we received, she received additional wonderful benefits and discounts. Which is something I remind my clients of. Sometimes if you're upset whether the ballrooms gushed or been caught on fire or whether it's double-booked, that might be a way to negotiate additional concessions.

Now often I phrase this to groups, how can I help you with your problem. Because in fact it is a problem but it's specified in the contract. So, again on function space make sure you're stating that and you have that right to consent. Beyond that, it's important to understand what's included in function space. As hotels get larger and technology gets better, some things are included in function space rental and others aren't. So, it's important to really understand. I know it might sound silly to have water station or pens and paper. But those are things which certainly we all know nowadays might be in short supply. So, be specific about what it is that you need.

One thing groups are sensitive to are conflicting groups. In the nonprofit space, it isn't so much of a conflicting group or competitor group. These may be groups that are adverse to the organization. They might be ones that want to protest or picket or anything along those lines, but bottom line the group wants to be aware of them and similarly we want the space to have that element of quiet enjoyment. That element doesn't necessarily mean from a noise standpoint, although we would admit quiet speaks to noise. But it means really to any interruption. So, for example if there's ongoing construction at the hotel, you have odors, you have dust. That can impact the quiet enjoyment of the space.

Here again it isn't so much that there's going to be triggers, all these damages, or triggers a walk away. It simply triggers the fact that the parties need to fix it, but the group and hotel work together. Last on my list I'll say is technology. We all love it. It's great when it works. But when it doesn't work, it's the fingernails on the chalkboard for many planners. And so, being as specific as you can with regard to technology, bandwidth, users, etc. Even though I realize that those elements change quite frequently, it is important to set an expectation of what that baseline is. And Lisa, as groups expand their footprint and hotel space and as hotels modify their function spaces, I know they often do. These are some of the things I think that often are problems that come across my desk. And I know we've had a couple of circumstances over the years where it's come across both of our desks, but we've been able to reach a resolution.

Lisa: You're right Barbara and I agree with everything you said. But from the hotel perspective, one of the reasons they don't always like to agree on specific meeting rooms is because from the hotel side that function space is like a puzzle. And they're trying to put together all the pieces so that they can fit as many groups in as they possibly can. If they guarantee specific space, that will limit their flexibility as they're booking new business. They're going to be willing to give you the specific functions based by name, but they would like to have the opportunity to come to you and ask to move things around, so that they can accommodate other groups. And again as Barbara says, that may be an opportunity for you to get some concessions or some discounts, so that the hotel can maximize its occupancy.

It's also important to have a conversation with the hotel about what the schedule of the event includes. Does that include set up and teardown time? For large events, where you're going to be using a ballroom with a specific stage that's set up for that event, usually, there's a whole day for setup and teardown. But for smaller events, you need to know how much time you have to be in that room. Ideally, a hotel would love to schedule a breakfast for group A, a lunch for group B and dinner for group C all in the same space. But if they're having setup, they need to know how much time they actually have so that's something to think about.

Now I always joke that when you're dealing with brides all bets are off, because anytime something goes wrong for a bride, they're unhappy, but you know, as Barbara indicated, you never know when that might turn into something in your favor. When you're concerned about what's going to be happening in the hotel at the same time as your event for whatever reason that might be. If you're a non-profit organization with a specific mission and other types of organizations might create a conflict, if you're running into each other in the lobby or in the hallway outside your function space. That's something you need to address in your contract as either a competitor clause or working with the hotel to identify other groups that are going to be there at the same time.

But keep in mind the hotel's going to tell you that they have to keep the identity of other groups in the house at the same time confidential. So, you're going to have to work with them to come to an understanding as to what's going to happen. Barbara is right that construction can be a problem in function space. But if it's not directly impacting your event, again that's an opportunity rather than a basis for cancellation. So, function space is something you need to think about. You also need to be willing to work with your hotel partners to release space if possible, to allow them to book other business in exchange for concessions that you might want to get. Barbara, anything we're missing here?

Barbara: Lisa, just want to dovetail on what you said about looking at the amount of time that group has space reserved. I recommend to my group clients you only have 24 hour holds on space that you absolutely need 24 hours. Because if there is an opportunity for the hotel to be able to use a breakout room, for example, in the evening for a function, they should be allowed to do that and that will allow the group to negotiate additional benefits. So, really look hard at those; I think that's important. Also, with regard to scheduling, as cleaning and health safety protocols increase potentially, you'll need more time built into that schedule. So, factor that into the space reservation as well.

And the bottom line is really being specific as you can, allow for flexibility, focus on what's important to the group. If you get a call, if you get an email that is, the ballroom caught on fire or we've double booked the ballroom whatever the case may be. Once you get over that hysteria which I know is common, really focus on the, okay how do we work it out to a way that's mutually beneficial. And again, my experience as yours Lisa has been that we can usually reach that resolution once the parties can discuss it. Anything else to add Lisa?

Lisa: I think that's it. So, thanks for joining us today for legalese with the ladies. Please leave your comments below and join us for our next video. Thanks.

Every month HopSkip analyzes data from around the meeting and events industry to understand trends in the market. HopSkip picks a few of the most relevant trends from research conducted throughout the month and we share those data points with the rest of the...

This post is part of the HopSkip Destination Insight Series, where HopSkip spotlights destination partners across the globe to bring awareness to what makes their destination unique.

Requesting concessions during the hotel proposal process can be a planner's secret weapon.  If you're bringing a substantial amount of business to a hotel, these concessions can be a serious cost avoidance tool by adding cost savings to your meeting's bottom...